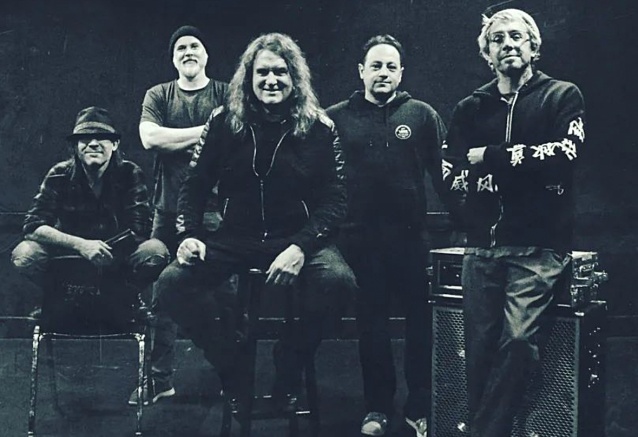 Former MEGADETH bassist David Ellefson is collaborating with the visual art team SceneFour on an art collection crafted from a new medium in artwork, bass performance.

Ellefson is expected to build visuals for canvas based on the movement of his fingers on the frets using a proprietary LED-tipped glove. The result is an astonishing collection of artworks that showcase the unique style of the bassist in a visual form.

SceneFour announced the collaboration in a social media post on Wednesday (January 19). They wrote: “This week, @scenefourart is in studio with our first bass player David Ellefson creating artwork from performance. Look for the collaboration’s unveiling later this year.”

SceneFour is primarily known as the team responsible for the “rhythm-on-canvas” medium, having released art collections over the last several years with a highly select group of drumming legends, including Bill Ward (BLACK SABBATH), Rick Allen (DEF LEPPARD) and Dave Lombardo (SLAYER).

SceneFour, a Los Angeles design and branding firm, uses LED technology to transfer the musicians’ unique style onto a canvas. The art reportedly provides a “musical fingerprint” that is as unique as an artist’s autograph.

“Each guy’s artwork looks drastically different because their styles and techniques are different,” Cory Danziger, who co-founded SceneFour in 2004 with Ravi Dosaj, a graphic designer, told The New York Times.

“Bill Ward‘s artwork is dark and there’s kind of a foreboding element to it, whereas Chad Smith‘s has kind of a light and airy feel to his playing. His arms are open and those pieces have a butterfly effect,” Danziger said.

Ellefson was fired from MEGADETH last spring after sexually tinged messages and explicit video footage involving the bassist were posted on Twitter. At the time, Ellefson was accused of grooming an underage girl through videos and online messages. David has denied the allegation and has repeatedly said the woman in question had been a willing, consenting adult at the time of their virtual sexual encounter. Ellefson accompanied his denial with an alleged screenshot of a statement from the woman with whom he was supposedly involved at the time. In it, the woman admitted to recording the alleged intimate communications she had with Ellefson and called herself “naïve” for sharing them with a friend without the musician’s permission.

In 2004, Ellefson filed an $18.5-million lawsuit against Dave Mustaine, alleging the MEGADETH leader shortchanged him on profits and backed out of a deal to turn Megadeth Inc. over to him when the band broke up in 2002. The lawsuit was eventually dismissed and Ellefson rejoined MEGADETH in 2010.

David, a Christian who launched the Mega Life Ministries worship group in 2007, studied for a year at Concordia Lutheran Seminary in St. Louis a decade ago.

HAMMERFALL Joined By KING DIAMOND On New Single ‘Venerate Me’