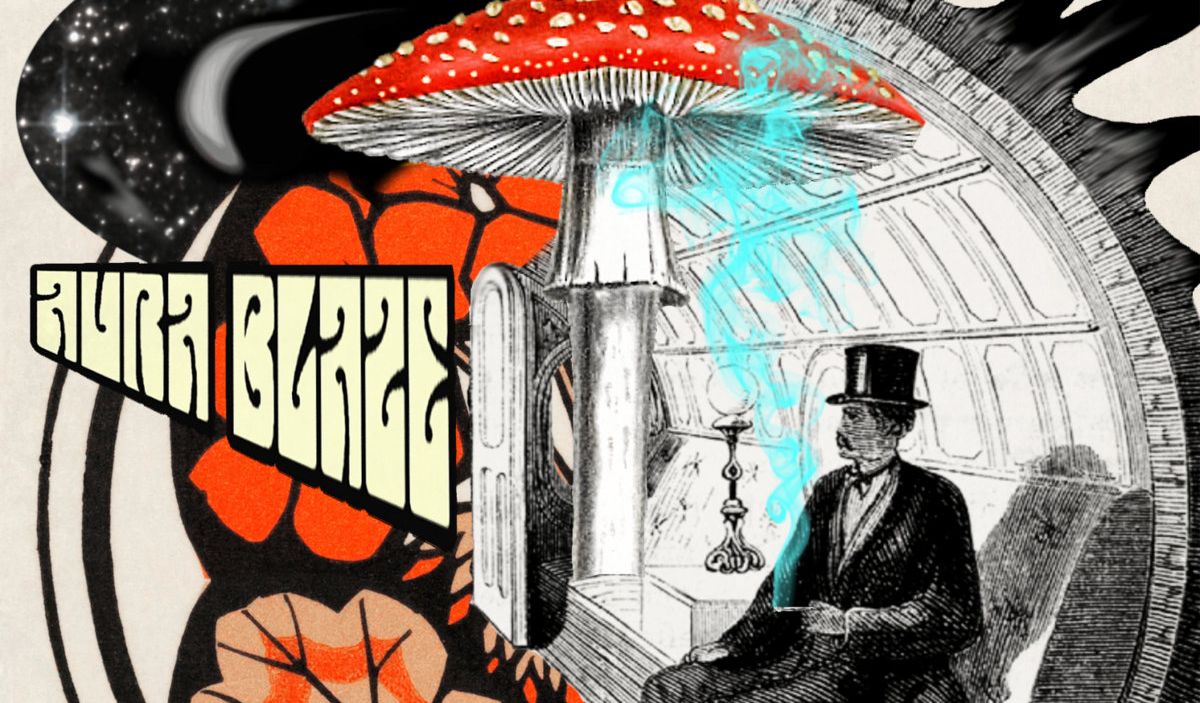 Aura Blaze is a dream pop/shoegaze/psych pop project started by producer and instrumentalist Rhode Rachel with his Zappa-esque 2015 debut self-titled album. Clearly influenced by early psy-and-surf-rock like the Beach Boys, King Crimson and The Doors with a tinge of psychobilly a’la The Cramps, Aura Blaze’s style back then was big and bold and, energetically was sort of a retro-styled match to The Polyphonic Spree. This huge, orchestral sound only comes out of one person, however, so it’s not surprising that Rachel has made a name for himself in more than one indie genre.

While the debut album was almost all analog rock, it’s also not surprising with his cinematic, larger-than-life, Spector-esque wall of sound style that with subsequent releases, Aura Blaze would go on to incorporate electronic methods. 2019’s The Sparkling Black showed more obvious electronic play both in sound design in synths, as well as a healthy lashing of Jethro Tull-style prog rock. 2020 saw his next single “The Plight of the Soul Ablaze in the Face of Mortal Drudgery” – try to say that five times fast – continue this trajectory both with prog-style storytelling and psychedelic wisps of sound but adding even more synths and sound design.

A focus on esoteric and spiritual throwback vibes with psychedelic music seemed to be galvanizing as Aura Blaze’s style by the afore-mentioned super-long title, but it took a hard turn, or rather, an evolutionary step, with Rachel’s next track, “Trans-Dimensional Palm Tree.” Switching to a more 90s The Cure-style guitar, maudlin tones and loads more ambient sound design, Rachel’s vocals became softer and more drone-like to match, conjuring Ian-Curtis-on-his-meds (or just a baritone Ian Brown, maybe?) vibes. The music was much more shoegaze and dream pop than psych rock. Modernized but still getting his astral point across, “Trans-Dimensional Palm Tree” made an impact and is still among the most streamed tracks on Aura Blaze’s Spotify page.

Flash forward to Open-Mindedness, Aura Blaze’s latest EP offering which dropped last month on Christmas Eve, Rachel has kept that shoegaze vein but re-incorporated the psych rock and even more styles into the two original tracks. The title track is just as operatic and grand as Rachel’s earlier work but the cool post punk vocal tenor and chord progressions are still there in spades. There’s also progressive bass work, 80s style synths and even a bit of late-era disco tying the bigger, theatrical sounds to the soft vox. “The Summer Solstice,” meanwhile, pays homage to Aural Blaze’s 60s-psych roots with Doors-style organ synths and surf rock melodies, all while Rachel lyrically pays homage to the sun as a literal “Aura Blaze.”

The last track on Open-Mindedness, if any readers doubted this long-suffering shoegaze nerd author’s ability to pick out such influence from a modern artist’s work, is a cover of “The Only One I Know” by The Charlatans UK. Arguably an icon of 90s Brit Rock and shoegaze, The Charlatans were also heavily influenced by 60s mod-and-psych rock, so there. Rachel’s version of The Charlatans’ biggest hit could properly be called a remix, as he adds loads of even more spacey-sounding ambient sound design to the track’s original structure (possibly even the original stems) and more ornamentation around the synths, making it even more theatrical and wall-of-soundey than the original. It’s a grandiose update of the classic and he more than does it justice.

With all the styles and sounds Rachel as Aura Blaze incorporates into his work and all the different directions he’s already taken said work, one thing that hasn’t change and likely won’t is his message. While psych rock, shoegaze, dream pop et al. all have a sort of woo quality and are quite esoteric, Aura Blaze goes beyond just trippy musings. His lyrics and philosophy are entrenched in spirituality and high vibration expression, and he sees his music as simply a delivery system. A highly complex, varied and expertly- produced delivery system, but a delivery system nonetheless. With almost infinite avenues to create said system, there are also infinite possibilities on where he will go next with his sound, but it will be guaranteed to be lush, potent and heavy on the contextual Astral Blaze.

Open-Mindedness is out not on the famous psych pop label Cleopatra Records. Stream it and Astral Blaze’s full discography on Spotify or click here to stream or purchase on other platforms.